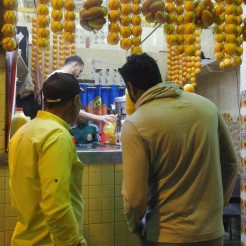 It is with a touristic uncertainty that I arrive in Cairo. The websites describe the chaos of the city, the guidebook tells me to be vary of pickpockets so I clutch my shoulder bag close to my body in case anyone dares take my travel sized lotion or lip gloss (I have no other items of value). Outside the airport, a man wears a broad smile and holds up a page with my name printed on it and almost at once I relax. Perhaps the sight of your name in a foreign country does that to a person, it makes you feel like you belong. Or maybe – and this is the more likely option- it is the Egyptians themselves who have been so warm and friendly that you cannot help but feel welcome.

It is around 2pm when we leave for the hotel and the man who has come to fetch us tells us that it is a very busy time on the roads. With his curly hair and scruffy beard, I cannot help but notice that he bears an uncanny resemblance to Rick Grimes from the Walking Dead, apart from the fact that Mohamed smiles almost constantly. “Why are the roads so busy at this time?” My uninformed question is answered with a mild mannered chuckle and “In Cairo, we don’t have rush hour, we have a rush day”.

Nothing has adequately prepared me for the madness of Cairo’s roads. And what seems like madness to me is perhaps some form of ordered chaos for those who live here. I feel as though I am looking at one of those pictures made out of a series of unconnected dots. The roads here seem to bear that same concept, that perhaps if I looked at this scene at just the right angle I would see the coherent picture hidden in it’s midst. Everyone else seems to. Everyone seems to understand the collective, unwritten rules that govern these roads. Cars swerve dangerously close to one another correcting course at the very last second to avoid impact. Hooters punctuate every turn, movement or annoyance and altogether they rise and fall rhythmically. The sound is so constant and unyielding that I wonder if it has any effect at all on the motorists. Almost all the drivers are either smoking or on their phones, or in some cases both. In the puff of cigarette one car almost crashes into another, a torrent of Arabic words fly off coupled with emphatic hand gestures, a fury burns so blight it blinds you witness it. Then something remarkable happens, when the driver exhales, releasing a plume of smoke from the depths of his lungs, his anger and rage dissipates as quickly as the smoke does. The driver’s anger, as fleeting as the smoke that circles him, escapes through the open window. A moment of violent passion followed by a calm acceptance, no residual anger or frustration, just another Egyptian trying to get to where they need to. And perhaps in the next couple of puffs, the same scene will repeat itself but for now there is such a serenity and calm in the madness, that I can’t help but admire the Egyptians fortitude on the roads. I can’t quite picture the same thing happening back home in Johannesburg.

It was later that evening that we walked through the bustling streets of the Khan el-Khalili market. Streams of people crowded the alleyways, streets and market stalls, filling the bazar with a collective murmur, the chatter and sounds of life. The feeling was unmistakable. In these streets, Cairo lived and breathed, pulsating with every sound and movement of it’s people, both native and foreign. I smile politely but do not encourage any of the vendors as they alternate between “India? Where are you from?” and “Come madam, no hassle”, my purpose that night was to experience the market, to experience Cairo at night. My lazy feet could not keep up with the steps of those around me, Egyptians seem to all walk at a hurried, purposeful pace, although upon seeing a friend or someone known, they stop, leisurely exchanging warm greetings, perhaps a kiss on each cheek in greeting. I occurs to me that my time in Egypt is too short and that perhaps this visit bears repeating. Later when I have a sweet glass of fresh mango and orange juice for a ridiculously cheap price in one hand, and a black henna tattoo adorning my other, I realise that have never felt more at home and like a tourist at the same time.

I am, if nothing else, a perfect example of the dichotomy that exists in every one of us. I seek adventure, yet I long the grace of long days spent reading in a quiet treed spot. I am hedonistic but pragmatic. I long to create yet I burden myself with thoughts that I am not worthy. I started this blog to share part of me, my thoughts and experiences. View more posts